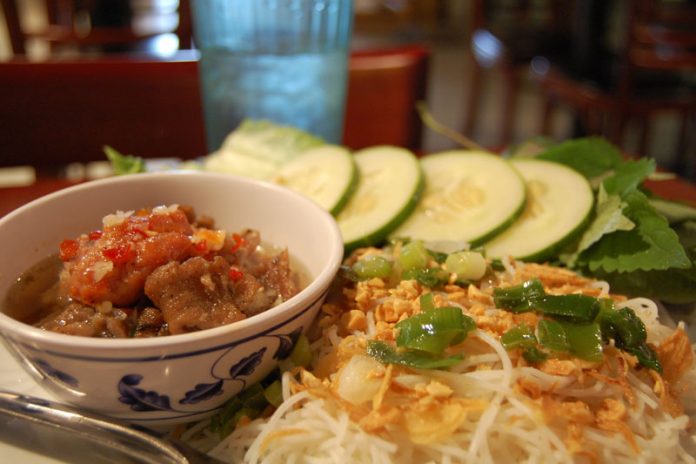 You may think you’re familiar with Vietnamese cuisine, but you haven’t seen anything yet. At District One, traditional Vietnamese fare is fused with Japanese, Chinese, Thai, and American influences to create a surprisingly affordable yet over-the-top menu of pho, seafood, rice bowls, and appetizers. Looking for a new place for lunch or dinner? Here’s why District One Kitchen and Bar is about to become your new favorite place to eat.

Behind the Name
Saigon or Ho Chi Minh City — Vietnam’s largest city — is divided into twelve districts. District One is the city’s dining and entertainment hub. District One Kitchen and Bar brings the atmosphere and intrigue of Saigon to Las Vegas.

Chef Khai Vu
District One Kitchen and Bar is the dreamchild of Chef Khai Vu, who was born in Vietnam in 1980 and came to the United States when he was 11. Chef Vu has always had a passion for food with a style inspired by his grandmother’s cooking. Chef Vu opened District One in the Mountain View Plaza off the Chinatown drag in 2014 with a menu inspired by the cooking he grew up with yet nothing like traditional Vietnamese cuisine.

The Atmosphere
District One has a spacious interior and a casual environment. There’s no need to dress up and you’ll find plenty of screens playing live games throughout the restaurant. District One is on the trendy side but the atmosphere is still very relaxing and the bar tends to be busy.

What to Try
While District One isn’t a traditional Vietnamese restaurant, it’s known for its impressive pho presentations. The most unique is the whole Maine lobster pho but the Big Bone Soup is also popular with a large bone filled with marrow floating in heady broth. Their signature bone soup comes with a large cross section of the shank with plenty of marrow with a large serving at an affordable price. You’ll also find other mouth-watering varieties of pho such as Pho Bo Vien (Vietnamese-style meatballs) and Pho Tai Nam (flank steak and ribeye), and Pho Oxtail.

The pho here is great, but don’t forget to look past it to discover the other gems on the menu. The Asian-marinated garlic serrano wings and the yellowfin tacos are always a hit. You should also give the pork belly bao a try. They come in steamed or fried varieties, both of which are tender and flavorful.

The Bottom Line
District One is, above all else, an interesting and fun place to enjoy a unique twist on Vietnamese cuisine. You’ll find a good mix of traditional options like oxtail pho with new flavors like New England lobster. If it’s your first time visiting, try stopping by during happy hour for excellent mixed drinks and oysters.