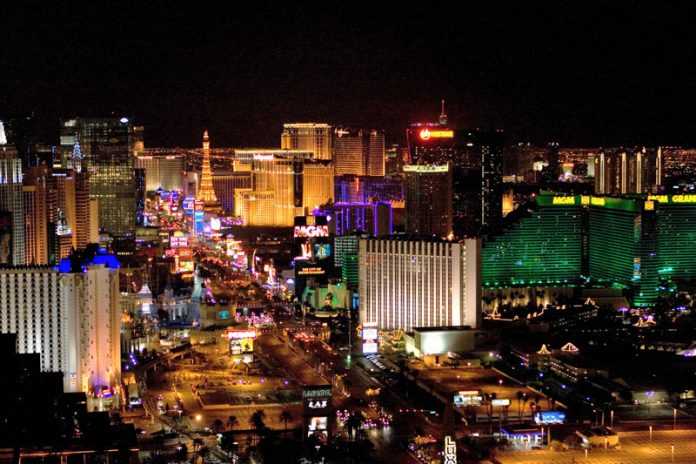 MGM Resorts International has announced that it will power its large share of the Las Vegas Strip using a dedicated solar array that can supply up to 90% of daytime demand at 13 casinos the company owns.

MGM Resorts has partnered with Invenergy out of Chicago to create a massive solar array that will be complete in 2020. Construction of the solar array will begin in 2019 on 640 acres of land where Highway 93 splits from I-15 at the Apex Industrial Park. Under a 20-year agreement, all of the electricity the array generates will go solely to MGM Resorts. The site falls under the Dry Lake Solar Energy Zone, one of 19 nationwide areas designated by President Obama to fast track solar development in the United States.

MGM Resorts’ array will consist of 336,000 individual solar panels that can produce enough energy to power 27,000 homes. During its construction, the array will employ around 350 people and generate $20 billion in property tax and sales tax revenue.

This project is only possible because MGM Resorts was able to end its relationship with NV Energy in 2016 and begin buying electricity on the wholesale market. This was a difficult move as NV Energy is Nevada’s monopoly utility provider that did not want casinos to leave. Together, MGM Resorts, Wynn, and Las Vegas Sands — all of which sought to buy renewable energy for their Vegas hotels — accounted for 7% of NV Energy’s total electricity sales. The utility said if the casinos left, it would be forced to significantly raise rates for other customers.

To separate from NV Energy, Nevada’s three-member public utility commission (PUC) demanded that resorts pay tens of millions in exit fees to compensate for losses of power plants and assets the utility bought with casino demand in mind and prevent broad rate hikes for customers. While the resorts complained the exit fee — a combined $126.5 million for all three resorts — was too high and potentially illegal, MGM ultimately paid an exit fee of $86.9 million to leave NV Energy.

Wynn Resorts also left NV Energy with an exit fee of $15.7 million and partnered with Enel Green Power North America to built its own solar array close to Fallon, 375 miles outside Las Vegas. Wynn’s system will go online in the summer with all power sent through existing transmission lines to Wynn Resort.

The solar race on the Strip began when MGM Resorts built a solar array on top of the Mandalay Bay Convention Center in 2014. The array was later expanded ton 20 acres of a roof in 2016. This is still the largest contiguous rooftop solar system in the United States.

When the Invenergy project goes online in 2020, MGM Resorts will receive 30% of its power in Southern Nevada from renewable resources. The company has a goal of reaching 50% renewable energy in the coming years as battery technology advances to storage solar power for nighttime use.