Another EDC weekend is over, marking the 22nd year of Electric Daisy Carnival in Las Vegas. The festival, hosted at the Las Vegas Motor Speedway by Insomniac Events, combines carnival rides, camping, art, and performers with the biggest names in electronic music for three days of fun. Total attendance for the 3-day event was estimated at 411,000, about the same as the last three years. The theme for this year’s festival was “Kinetic Love,” a nod to the acceptance that thrives in the dance music community.

The festival had a rocky start with camping although it proceeded without a hitch for the rest of the weekend. This was the first year Electric Daisy Carnival Las Vegas featured camping but Insomniac Events regularly hosts camping at its other events like Nocturnal Wonderland and Electric Forest. Camping this year featured an air conditioned shelter to beat the Vegas heat, exclusive parties, a pool, yoga, and more. The camping was filled to its 30,000 capacity but it appeared Insomniac Events wasn’t prepared for the sheer number of people who arrived to Camp EDC on Thursday. Many attendees were left in line for hours.

The organizers have made several improvements to the festival over previous years, most importantly moving the festival from June to May with a drop in temperatures of around 10 degrees. The addition of on-site camping also helped reduce the heavy congestion usually seen with the festival. Opening ceremonies at cosmicMEADOW began 3 hours early this year to also improve traffic congestion.

Aside from these new improvements, Insomniac Events once again made EDC an unforgettable and over-the-top production. Every stage featured creative design with nightly fireworks, laser shows, and amazing acrobatics.

EDC 2018 featured more than 200 acts over eight stages. The ever-popular Kinetic Field is the biggest concert stage in North America and hosts the biggest names in EDC. This year, Diplo once more returned to EDC although Kygo and Spaceprodigi stole the show. Spaceprodigi, a 17-year-old, became the youngest performer to hit EDC’s largest stage, clearly enjoying her moment with a set that was easy to get lost in despite performing in daylight to a fairly small crowd as the gates had just opened.

The cosmicMEADOW stage, the only stage with grass, featured Khalid, Mike Will Made It, and the Binches, an LA-based supergroup with three of its four artists also performing solo sets.

As far as police presence, there were fewer arrests than in some recent years. Police made 28 felony arrests, all related to narcotics, late Sunday and early Monday. There were a total of 90 felony narcotic arrests over the -day event. A total of 263 people were ejected from the festival, down from 282 last year. 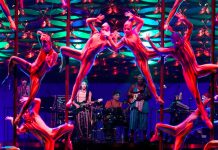